Independent Reviews of Mark and the Team

It Began Over Lunch With a Decision of a Lifetime

That Left His Mom Speechless...

Mark Seiden remembers the lunch in 1993 as if it were yesterday.

He had obtained a degree in hotel and restaurant administration from Cornell and completed a dietetic internship at UC Berkeley. He had spent 10 years working in the food industry and had reached the peak of success as a District Manager in New York. And with his wife, Amy, pregnant with their first child, you would have thought he had everything he could ask for. Yet, there he was, standing figuratively at the crossroads of life…that intersection where present responsibilities and future aspirations always seem to meet.

He could have easily stayed the course and remained on track climbing the corporate ladder to success complete with the security of health benefits, a regular salary and a company car. In fact, most people surely would have. But most people don’t share Mark’s unwavering spirit of determination or his deep-seated belief that anything is possible in life if you’re willing to put forth the effort to achieve it.

A Leap of Faith

Mark knew in his heart that he’d had enough of putting out fires in the corporate arena. He knew he wanted a more balanced life for himself and his growing family, and he longed to get back to helping people on a personal level by making a true difference in their lives. Regardless of the risks involved, Mark realized it was time to leave the food industry behind. So with a single leap of faith, he embarked on a new career in real estate and never looked back. 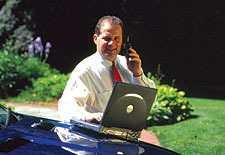 “I told my mom that after years of pleading with me to come work at her real estate company, she’d finally gotten her wish,” says Mark looking back. “It was the first time I’d ever seen her speechless.” But slowly, a smile crossed her face and she said simply and unequivocally, “Don’t worry…you’ll be great.” Truer words may never have been spoken.

It’s been said that in the defining moments of your life, you either define the moment, or the moment defines you. Well today, Mark is the owner and broker of his own real estate company right here in Westchester County where he grew up. He and Amy have three growing children of their own and the house of their dreams. From refereeing his children’s soccer games on the weekends to sharing ice cream sundaes with his kids at Yankees games to making a difference in the lives of the countless families he’s served over the years in his real estate career, it’s safe to say Mark truly defined both the moment and his life on that day back in 1993.

The Key to Success

For Mark, the key to success has always been his steadfast determination to excel. It’s what allowed him to take the industry by storm. From the beginning, he began challenging traditional business models and refused to settle for the standard, “business-as-usual” approach. Instead, he continued looking for new, better and more efficient ways to help people make the most of their real estate opportunities. From his cutting-edge marketing techniques to his interactive website, Mark has always been a pioneer in the field, and today, he’s widely recognized as the premier authority in Westchester County real estate.

If you have a particular expertise and proven performance, we want to hear from you. We are always looking for top professionals for our Preferred Providers List. Call our toll free number and enter extension 4037 today.